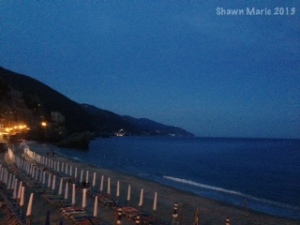 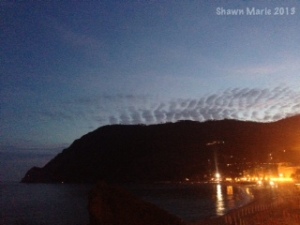 It was my second time in Cinque-Terre but the first time I got to stay overnight. It’s really no wonder it’s such a popular tourist destination, from the hiking, to the scenery, to the idealistic little villages; it’s colourful in both its energy and ambiance. I stayed in Monterosso, which is the last of the five villages that makes up Cinque-Terre. Monterosso is the epitome of a beach town and I felt like I was almost camping in my little single room at the hostel (which I loved). I had such an amazing time here that one post would never be able to fully express that. The other day I found a little blip I had written in my phone while there. I was sitting at a sea front bar, drinking an Aperol Spritz and looking out at the lights of the neighbouring villages. I thought for this post, I’d share that note and some photos from that moment.

June 29, 2013
I’m sitting here at a seaside bar in Cinque-Terre, Monterosso to be exact. Glittering in the distance is Varnezza! Sparse twinkling lights, shimmering up the cliff side, but at dusk they almost look as though someone has put Christmas lights on the hills. Monterosso is buzzing with locals and tourists alike. It is high season and the feeling of summer in is the air. The feeling of long nights and even longer days; of sand and salt mixed into every inch of your body and no desire for it to be any other way. A boat sails into the harbour, a momentary distraction but gone as quickly as spotted. Boating is second nature to those here. The sea is a part of life; of everyone and everything, as it is with most coastal towns. It is with blurry eyes I try to stay awake, I’m exhausted from the day but I do not want it to end. At the sea is where I feel most at peace. And although another vision of the sea awaits me, I have enjoyed my time here so… Maybe that is all Cinque-Terre is ever meant to be for me; a fleeting moment of utter happiness, destined to be repeated but not revelled in for long. How else could you truly understand the immenseness of being complete? Even if only for a day.