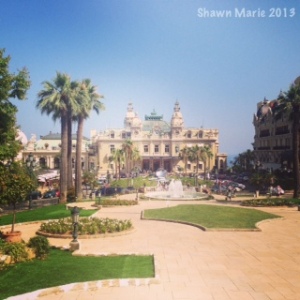 This was a great day! I had been out the night before at High Club in Nice and watched the sunrise on the beach, getting home just past 7:30am. I had planned on going to Monaco the following day and somehow the next morning I headed out, slightly hung-over and all. One of the bus stops will let you off just in front of the world famous Monte Carlo Casino and that’s where I started. I had seen the outside before during that trip in 2010, but had yet to be inside. It’s an intensely extravagant place and walking up you see car after car of Rolls- Royce, Bentley and other fancy sports cars. The Hotel de Paris next door is frequented by the very rich and hosts many parties and events. I saw a party there once on the terrace and the dresses these woman wore made me beyond envious! I tend to be nervous when I feel out of place or uncertain if I am allowed in somewhere, I had seen tourists going in and knew it was probably okay and I desperately wanted to see inside Monte Carlo; so I gathered my courage and walked right up those steps and went inside. I didn’t go to gamble, I just wanted to see it. Unfortunately pictures are not allowed inside, but I can tell you it’s gorgeous. The details in the carpet, ceiling (a stunning shade of blue, I can’t even describe) and decorations are exquisite. The bathroom even has a self cleaning toilet that rotates the seat and dries it after each use. Sections were closed off for a function of some sort and so I really only saw a small bit but I was happy nonetheless. I decided to get a drink at the bar and opted for a Aperol Spritz (my favourite) made with champagne at a staggering 19 Euros. It was probably the best one I’ve ever had! I made friends with the bartender and learned he was Italian (probably why his Spritz was so good) and that he travelled in each day from Ventimiglia, Italy. Coming to Nice from Cinque-Terre, Italy, I had passed through Ventimiglia so I knew of it and was surprised he travelled in each day (about an hour and a half). In total I was inside only an hour or less, but I felt really special and enjoyed myself a great deal. I just watched the people mingle about and gamble at the tables; drinking my Spritz. I’ll tell you about the rest of Monaco in another post but to this day, I will say, I have yet to see a place as glamourous as the area around Monte Carlo and the neighbouring Hotel de Paris.