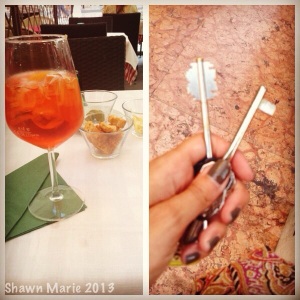 (The first of many Aperol spritz and my vintage B&B keys.)

(An attempt to catch the energy of Verona.)

What can I say about Verona? Home to Romeo and Juliet and famous for its opera; it’s also the first place I tried an Aperol Spritz! As is the theme with most of my trip (as you probably have noticed), I was only there for a short time. Less than a day actually from start to finish; I used it as a stopover between Switzerland and Florence. Mostly though I just wanted to see Juliet’s house and opted for a bed and breakfast next door (literally). After missing my bus stop (note: transportation drivers are not always helpful) and walking back quite a bit and purchasing a map, I finally found the B&B only to have no answer with the doorbell. I ended up having to call and since she had expected me about 2 hours prior, she had gone out. Luckily she wasn’t too far and within 30 minutes I was checked it, changed and ready to see Verona. The B&B itself was quaint but lovely, very feminine due to its owner but I enjoyed that aspect. The massive shutters opened to the bustling street below and added character to the rather modern space. The owner was the quintessential Italian woman, animated and exquisite. She was beyond welcoming and accommodating (I had my breakfast at 6am). My favourite part though, was how she said “Prego” as every other word. She’s the one who informed me an opera was to be preformed that very evening and I must attend to get the full Verona experience. I only really knew about Juliet’s house and because I knew my stay was brief, I didn’t look up what else to do or see. Thinking an Italian opera sounded wonderful, I made a metal note to check out tickets and headed next door to Juliet’s house. The courtyard part is free but it is quite small and pictures are difficult with people in every nook and cranny. The house is a bit larger and costs to go in which lessens the crowds a great deal. After looking around at the sparse space, I made my way to the electronic computer area to write my letter to Juliet (no paper letters anymore). Next was a quick stop on the famous balcony and I was desperately wishing I wasn’t alone at that moment so is have picture evidence of it. That was it, short but sweet and exactly what I had come to see. With an evening to kill now, I wandered around the cobblestone streets; just taking it all in. Verona is just a buzz with energy from tourists and locals alike. I found the arena and bought my ticket to the opera, “La Traviata”. By this point, exhaustion is starting to set in and I find a little restaurant to rest, eat and sit and to watch the passersby. After dinner, I make my way back to dress for the opera; suddenly I’m grateful to have brought a dress but missing my heels. Again with too much time on my hands before the start, I venture to a nearby piazza for a drink. Sitting in Verona, waiting for the opera, I realize I am in a sea of orange beverages. Being curious I order one and that, my friends, is the life changing moment of my first Aperol spritz! For those of you who have not had one it is Aperol, which is a bitter orange liqueur, and sparkling wine and it is delicious! As if I could follow that (ha-ha), I went to the opera. I sat beside a lovely German couple on a second honeymoon type vacation, which I quickly became friends with. They hand out candles and it’s so magical in the open air arena with the sun setting and the hundreds of candles all aglow. I couldn’t believe I had almost missed it. The opera itself was an experience and although I couldn’t understand the words it was wonderful. It was also familiar and after a déjà vu moment, I text my friend to Google its movie origin. Turns out I was sitting at the very same opera as Julia Roberts in Pretty Woman!! At the last intermission I took a quick photo with my new friends and we said our goodbyes. I couldn’t keep my eyes open and knowing I was heading into a long day with Florence and Rome, I left before the end. The streets had calmed down significantly but it was still very lively as I walked home. I didn’t want to go to bed but I knew I had to and so with great sadness I ended my only day in Verona. The next morning I ate and took another pause at the gate to Juliet’s for a photo op and I was off to my next city. I would definitely return as there is a lot more to Verona then those two sites but I feel more then content with what I experienced. It’s a very romantic and family oriented city and maybe because I was a touch homesick, I felt a bit lonely here. I’d like to bring a companion if I ever get the chance again; if only to have someone to take my picture of Juliet’s balcony!